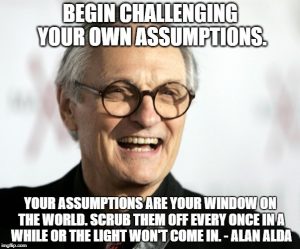 Hal Lindsey’s book The Late Great Planet Earth popularized the idea that mankind’s future is all laid out in the prophetic portions of the Bible. This is called Futerism, and for many of us Christians it’s the only paradigm we know. From there we try to figure out if we are Pre-Trib, Mid-Trib, or Post-Trib regarding the timing of the Rapture, and try to figure out if we are Pre-Millennial or Post-Millennial regarding the timing of the return of Christ. Whichever we conclude, we assume it’s all about the future, and quite possibly about our own future, if we are reading the signs of the times.

There are other paradigms such as Preterism and Historicism that put the fulfillment of End Times prophecy in the future of the authors of the Bible but in our past. These competing interpretations are scarcely known among proponents of Futurism and may seem quite foreign.

Without laying out a comprehensive alternative to Futurism here are but a few assumptions we make that either lead us to adopt Futurism or lead us to confirm our bias towards that paradigm, and why those assumptions are wrong:

We assume, because Bible teachers better than ourselves have told us, that God gave us a clue about what “soon” means, and it doesn’t mean “soon”. It means the opposite. We are told that clue is in 2 Peter 3:8 – “A day is like a thousand years and a thousand years is like a day.” See, it says right there! Soon to God isn’t soon to us. But wait, is that what Peter was trying to say? That “soon” means 2000 years, and counting? Why not just read the verse in context and see why Peter said that and we can see that it wasn’t meant to be a hermeneutic (method of interpretation) for the three verses quoted just above. It was meant to give patience to the believers when the atheist scoffers ridicule them for believing Jesus would return. It was meant to reinforce the idea that Jesus would return in their lifetimes, because God is not slack concerning his promises. He’s just biding some time to give people a chance to repent. The scoffers had their own timetable for when they thought God should act, if in fact God was going to act, and it wasn’t soon enough for them. Peter’s point was that God wasn’t on their timetable. He was still on schedule, God’s schedule, and the faithful who were reading Peter’s letter would see it done in their lifetimes.

Once these assumptions are recognized for what they are – assumptions – then we open ourselves up to alternative interpretations. It’s beyond the scope of one blog article to provide a comprehensive view of any competing interpretations but I would like to suggest my article Were Jesus and His Apostles Mistaken About Jesus’ Soon Return? as a starting point.

← $100 to the First Person to Demonstrate the Early Church was Trinitarian
Were Jesus and His Apostles Mistaken About Jesus’ Soon Return? →