Alright, let’s put this water baptism baby to rest. Water baptism was a Jewish tradition. Nothing more, nothing less.

For some it was a messianic initiation rite they would do to publicly proclaim their allegiance to a messiah, of which there were many to come through Palestine before and after Christ. John the Baptist used the practice for people to proclaim publicly that they had repented of their sins while he was pointing them to the Messiah who was to come.

That Messiah actually came to John to be baptized, to “fulfill all righteousness.” In the Old Testament baptism was used at a priest’s consecration for service (Num. 8), so the “right thing to do” (IOW, fulfilling righteousness) for Jesus was to be publicly consecrated by his cousin the prophet John. We see how this was no meaningless ritual since God also showed up to publicly affirm his Son’s ministry. 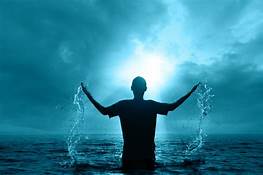 Jesus never commanded anyone to get baptized in water. Two scriptures are used, or should I say, misused, as proof texts for the necessity of water baptism. One is Mark 16:16, assuming it’s even talking about water baptism – a debatable assumption – and assuming it should even be in our Bibles – another debatable assumption: “Whoever believes and is baptized will be saved, but whoever does not believe will be condemned.” This is a classic case of the Negative Inference Fallacy. There is no need for us to state, “He who believes and is not immersed will not be saved.” The passage states a fact that baptized believers will be saved. It says nothing, however, about believers who have not been baptized.

The other misused scripture is the Great Commission where Jesus said to “go and make disciples of all nations, baptizing them in the name of the Father, the Son, and the Holy Spirit.” Again, the idea that there is any water in this verse is pure assumption. There are many ways to immerse a nation in the name of the Father, Son, and Spirit. One way, and I believe this is what Jesus meant, is to preach about the Father, Son, and Spirit. We can see how this was obeyed and fulfilled in Acts 5:28 – “We gave you strict orders not to teach in this name,” he said. “Yet you have filled Jerusalem with your teaching and are determined to make us guilty of this man’s blood.” To teach in the name of Jesus meant they were teaching ABOUT Jesus, not teaching about something else and then adding, “I teach this in the name of Jesus.”

That’s Jesus. What about Paul? Since water baptism was a Jewish tradition which Jews like Jesus and Paul practiced it’s no surprise that the spirit anointed Paul would assign spiritual meaning to it just as God assigned spiritual meaning to the pagan animal sacrifices that were practiced by the pagans long before God told the Israelites to do it. Paul explained the deeper meanings he assigned to the practice without ever telling anyone it was a necessary practice.

Since water baptism is not commanded anywhere in the Bible, either as a command to have it done to one’s self, or as a command to do it to others, we are free to do it or to not do it. There is nothing wrong with traditions. If you like it, do it. Or make it your own tradition by doing it your way.

Sprinkling vs. full immersion? Do it in the name of Jesus or in the name of the Father, Son, and Holy Spirit? Make it your tradition and do it the way you want to do it.

But please, however you do it or don’t do it, don’t be telling others your way is a commandment of God. Jesus said about doing that, “Their worship is a farce, for they teach man-made ideas as commands from God.” (Mark 15:9)

We have this weird modern view of inspiration which says that however the apostles did something in one or two places is the “right way to do it” as if that’s the only way it was done or that the apostles or anyone else never exercised any personal, human discretion in how to do it. This leads to a lot of legalistic (Pharisaical) interpreting and judgement of others who use more personal discretion in their interpretations and practices. It also leads to a lot of the pride that comes with doing things the “right way”.

With the Jews’ messianic initiation rite of water baptism they categorized 6 ways to do it on a scale from “most preferable” to “least preferable”. The least preferable method, when there wasn’t much water available, was to pour a little water over the person, which would at least signify cleansing but it would not signify death to self and rising to walk in a new way. The most preferable way was to do it in a river because you could both dunk and the water was always fresh so made for a better symbol of cleansing. An in-between method would be to use something akin to a baptismal tub, which of course wouldn’t have as clean and fresh water as a river, but those pools were common in the city. Wealthy Jews often had them in their basements. It was more convenient than trotting out to the Jordan.

The point is they adapted to their circumstances as they saw fit. There was no right way or wrong way to do it, just preferable ways because the more preferable ways had richer symbolism.

Would someone who was baptized by pouring rather than dunking not experience death to self and rising to newness of life? Would someone who got baptized in dirty water not experience the cleansing of the Word of God? Of course he would. The act was just a symbol. It wasn’t the reality. More than likely he was experiencing the reality long before he ever got baptized and “did the symbol”. Yet some people believe a person can’t even be saved much less experience the reality of it unless they perform the symbol!

I think water baptism and our reactions to it reveal a modern form of Phariseeism, aka legalism. We get so fixated on following the example of the apostles and how they did it because that’s the only “right way” to do it, as if God told them there is only one right way to do it. We don’t consider they might just be doing their own human traditions the way they saw fit to do it, using their own human personal discretion. If that’s the case, to follow their example would be to do likewise, and forget about the whole idea of a “right way” to baptize.

If how the apostles did things is the only “right way” to do it then why don’t we follow their example today for other things, such as preaching the Gospel? How many of us have ever done any open-air preaching or have gone into a temple to preach? Some may have, and may have found it to not be a very effective method in today’s world, so have adapted their ways to what works today, always innovating as new technology affords new avenues for ministry.

We allow ourselves and each other the liberty to “do it our own way for our own reasons” when it comes to numerous things, not the least of which is how to do church, but won’t extend that liberty when it comes to a Jewish messianic initiation rite. No personal discretion is allowed.

Not allowing for personal discretion is one of the things which made the Pharisees so legalistic and judgmental. The Torah said not to labor on the Sabbath but the Pharisees couldn’t just leave it at that and let the people figure out for themselves just what that meant for each family. Oh no, they had to come up with rules for everyone, such as, “You can carry the weight of a dry fig on the Sabbath but not the weight of a wet fig,” or for a healer like Jesus they said he couldn’t do that on the Sabbath because that was his “job”, all the while doing their “job”, which was to judge others, hypocritically doing that on the Sabbath.

When we judge others for not “keeping the Sabbath” in the way we think they should keep it, or for not baptizing the way we think it should be done, or judging those who care not to follow the same Jewish traditions the apostles followed so don’t get baptized, are we doing any better than the Pharisees?