This book lays out only two options, either negotiate with the enemy or “evil such as this must be met with force. Nothing else will do.” And by force he means try to kill off every extremist Muslim in the Middle East. If Mr. Sekulow is the new voice of the Christian Right then I hereby turn in my membership card. As followers of Jesus there is so much more we can do and it’s sad that Christians can’t think of any. I no longer want to be a part of a movement that has nothing more to offer the world than what the world can produce well enough on its own: fear, hatred, and violence. As Christians I think we can do better. Way better. Here are my proposals. 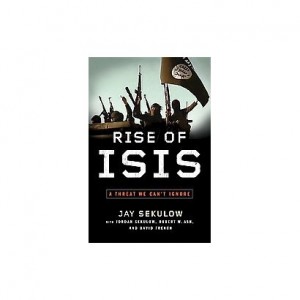 This book is as much a tome on international law and the ACLJ’s defense of Israel in the international court of law as it is an explanation of ISIS. At least seven of the eleven chapters are about Hamas, not ISIS. It smacks more of fear-mongering to sell books and raise funds for their ministry than a means to educate people about the current ISIS crisis and what we can do about it. We know fear-mongering sells, just look at how many millions the Left Behind books and movies have made for Tim LaHaye. If this book becomes popular it will be because fear sells, not because it has much else to offer.

At one point he makes the Hitler/Nazi Germany analogy and of course sounds the alarm that if we ignore this threat like everyone ignored Hitler at first then we will be sorry. That is just plain silly. ISIS on its best day doesn’t have the military capability of one WW2 German armored division. At one point in WWII Germany had 5 million men under arms. ISIS hasn’t had more than about 40,000 on its best day. Military experts don’t even think they can overtake one large city in their own back yard like Baghdad defended by a corrupt and inept Iraqi army, yet alone swarm over the Atlantic and take on the world’s superpower on our own turf.

The author doesn’t even delve into the reasons for the rise of ISIS, including our funding them to help topple Syria’s Assad, and the power vacuum we created when we toppled Saddam Hussein.

The author is a paranoid alarmist who will certainly find other paranoid people to help fund his ministry. If all you want to know is how horrible ISIS is then this book will give you what you want. If you already know that, then save your pennies.

Why Christians, and All Americans, Should Support the Palestinians, Not Israel
A Christian’s Plan to Deal with the ISIS Crisis
We Should Have Listened to the Libertarians About the Middle East