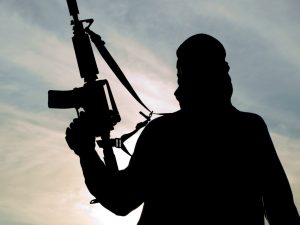 What is the source of this oppression today? If you ask those who are fighting against oppression, you will find a common theme: Western control of Muslim countries. This not only includes the presence of the American military but also leaders of Muslim countries that do the bidding of American foreign policy, such as the Saudi Royal Family, and despots that were at one time on the payroll of the CIA such as Saddam Hussain in Iraq and Muammar Gaddafi in Libya, or put into power after their predecessors were toppled by the CIA, such as the Shaw of Iran prior to the Iranian Revolution.

According to Foreign Policy in Focus, the U.S. has an empire of bases in the Middle East, and it’s not making anyone safer:

The presence of U.S. bases and troops in Muslim holy lands was, in fact, a major recruiting tool for al-Qaeda and part of Osama bin Laden’s professed motivation for the 9/11 attacks.

Currently, the U.S. has bases in every Middle East country except Iran and Yemen. Ironically, and tragically, our military presence in the Middle East is said to be for our protection, but in fact has been a major contributor to the exponential growth of the radical ideology we are fighting against.

Why does the United States risk the safety of Americans and the stability of the Middle East in order to have a military presence there? In order to safeguard our access to oil. To quote Secretary of Defense Chuck Hagel, who said in 2007:

People say we’re not fighting for oil. Of course we are. They talk about America’s national interest. What the hell do you think they’re talking about? We’re not there for figs.

But us having a military base out in the desert of some Muslim country is hardly us oppressing them, you might say. You might not think so, but if they think so, then it is so. Perception is reality, as they say in politics.

There is a common narrative today that says Muslim terrorists do what they do because they are Muslims. They are the ones who are the most zealous for their religion while the peaceful Muslims are the moderates, the ones who don’t take their scriptures as seriously as the radicals.

Simple answers like this have an appeal because they are simple, but to come to this conclusion you have to ignore two things: 1) Nobody takes Islamic scriptures more seriously than the large body of Islamic scholars whose job it is to interpret those scriptures and apply them to every aspect of a Muslim’s life. That body of scholars universally condemns violence except for rare cases of self-defense, saying their religion teaches against it, and 2) the simple “Islam is a violent religion” explanation ignores the very reasons given by the violent for their violence.

If Americans genuinely want peace in the Middle East and safety for us in America, then we need to stop pointing fingers at Islam or anything else we can’t change, and look at something we can change: our foreign policy. In order to make those changes we need to elect presidents that are willing to put our control of the world’s oil supply at risk and draw down our military presence in the world to a level that does not portray world dominance, while while at the same time maintain our ability to defend ourselves. This would require a fraction of the money we spend on our military today.

It requires a candidate representing a nation that puts ethics and morals ahead of personal gain. So far, we have not been that nation.

← Just Who Has the Itching Ears?
Jesus Used Fiction to Teach Truth →