For years I thought our use of military might was about humanitarian concerns, about being the world’s police force. That WAS the topic for debate, after all, wasn’t it? We couldn’t possibly be sacrificing the lives of our youth and the lives of Muslims overseas, under the pretense of protecting little nations like Kuwait from bully dictators, or fears of WMD’s, or eradicating terrorism, when in reality we were doing it for the sake of cheap oil, could we?

Please tell me it ain’t so.

After all, we DID help the Albanians in Kosovo against the bully Serbians, and Kosovo had nothing we wanted, right? 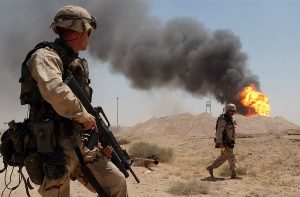 For several years I have heard this term “national interest” used as justification for intervening in one country while not intervening in another country. We wouldn’t get in the middle of an African genocide because it wasn’t in our “national interest”, so we were certainly choosy about when to be the big kid on the block protecting the little kids from the bullies on the next block. But why wouldn’t our more or less Christian presidents want to come to the rescue of Christians getting slaughtered by Muslims, Jews, Hindus, or Buddhists?  Why not help them instead of helping the Muslims in Kosovo who were being slaughtered by the Orthodox Christians in Serbia? Wouldn’t a Christian president have at least a personal interest in helping his fellow Christians?

So what was our “national interest” in Iraq? Over the years I began to suspect “national interest” didn’t mean national defense or humanitarian concerns, but national economic interests, such as cheap oil. After studying more about what we actually did in Iraq, and how our actions there, our tactics, methods and rules for engagement, and actual goals had absolutely NOTHING to do with humanitarian concerns, WMD’s, combating terrorism, or any other excuse they gave us, I began looking for other reasons to be there.

I had always heard that Iraq had the world’s second largest deposit of oil, but I was unwilling to accept the notion that I shouldn’t be thanking our young men and women serving there for protecting our country, but thanking them for $2.50 per gallon of gas while our European friends had to pay $7.50.

This just didn’t fit my ideas of who we are as a people and who we elect for public office to represent us in this world.

I suppose I could have chalked it all up to world-famous American ignorance (guilty, as charged, your honor) but that was then, this is now. In this day and age with the Freedom of Information Act and Google able to retrieve just about any information one would ever need in less than 1 second, I can’t use ignorance as an excuse. Stupidity maybe, but not ignorance.

Hey, I heard that. I’m working on it.

What I was wanting to hear, but didn’t bother to Google it, to confirm my suspicions that “national interest” was just code for “cheap oil,” was credible evidence that that’s what our foreign policy really is all about. I wasn’t interested in chasing conspiracy theories or mouthing liberal mantras. I just wanted credible evidence.

I couldn’t find any quotes from any of our Commanders-in-Chief, but how about one from a second in charge, such as Secretary of Defense Chuck Hagel, in 2007?

People say we’re not fighting for oil. Of course we are. They talk about America’s national interest. What the hell do you think they’re talking about? We’re not there for figs.

I wasn’t thinking figs either but I was running out of other options.

How about this one from 4 Star General John Abizaid – the former commander of CENTCOM with responsibility for Iraq:

Of course it’s about oil, it’s very much about oil, and we can’t really deny that.

Alright then. I won’t deny it. And I’m not going to keep quiet about it either.

While former Federal Reserve Chairman Alan Greenspan wasn’t a military guy he did have his finger on the nation’s economic pulse better than anyone. He said in 2007:

I am saddened that it is politically inconvenient to acknowledge what everyone knows: the Iraq war is largely about oil.

John McCain, while running for president and the ranking member on the Senate Armed Services Committee, someone privy to a lot of information about our military, had this to say about why we have been sending our kids off to be killed:

According to Joshua Rovner, Chair in International Politics and National Security at Southern Methodist University:

the United States has an enduring interest in protecting the flow of oil from the Persian Gulf. It has performed that role for nearly forty years.

Every Veterans Day we thank our young men and women for serving in the armed forces to make our country a safer place to live. But are they actually making America safer – or are they actually increasing the chances of our people being attacked? When it comes to our presence in the Middle East, many believe that presence is making us less safe. Consider this: Before we invaded Iraq, the core al-Qaeda membership in 2002 was 170. In 2006, while we had the most troops in Iraq, al-Qaeda had several thousand commanders embedded in 40 different countries.  Iraq was in complete chaos and anarchy after we toppled Saddam Hussein, creating the conditions for radical terrorism to grow exponentially.

According to Ivan Eland, Director of Defense Policy Studies at the Cato Institute:

indiscriminate U.S. military interventionism is a major cause of terrorism against the United States.

According to Major Danny Sjursen, US Army strategist and former history instructor at West Point:

Since our military involvement in the Middle East really isn’t about National Security, in fact increasing our National Insecurity at the expense of the lives of our nation’s own young men and women to the tune of billions that could have been used to help our own citizens, is it any solace to realize we pay less for a gallon of gas? Considering experts believe market forces rather than military force are more effective at keeping our gas prices down, our military intervention in the Middle East is useless, destructive (obviously), counterproductive, and tragic.

I can no longer in good conscience thank our servicemen and women for protecting our country – against present danger – because that’s not what they are doing. They are actually making matters worse. I can however, thank them for serving because in the event we actually do encounter a real threat to our nation, they will be there to take care of the problem should diplomacy fail.

← I Am a Dynamic Figure
Water Baptism is Not Commanded →