From my upcoming book Peace With Islam:

9/11 Gives Shape to our National Narrative –

After the Japanese attack on Pearl Harbor someone congratulated Admiral Yamamoto on his victory. His response was, “I fear all we have done is to awaken a sleeping giant and filled him with a terrible resolve.” 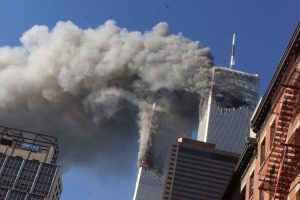 9/11 had much the same effect. We were first stunned, and then mad, and we were looking for a way to fight back. On the evening of 9/11 President Bush said from a televised speech from the Oval Office “A great people has been moved to defend a great nation…America was targeted for attack because we’re the brightest beacon for freedom and opportunity in the world…Today our nation saw evil, the very worst of human nature.” Three days later President Bush stood at the base of the smoldering World Trade Center and responding to the crowd vowed, “I can hear you. The rest of the world hears you, and the people who knocked these buildings down will hear from all of us soon.” On September 20 President Bush declared war on terrorism starting his declaration speech with, “On September 11th enemies of freedom committed an act of war against our country…Night fell on a different world, a world where freedom itself is under attack.”

With three well-televised speeches in the nine days the world was listening to our president and looking for an educated explanation of what just happened, President Bush not only served as our political leader but as our spiritual leader as well, giving us the explanation we were all looking for: these are evil people who are the enemies of not only America but freedom itself. Just like the Communists, we thought, they want to destroy us because we are the antithesis of what they stand for and we are in their way. Except this time it’s not a secular ideology as it had been before. This time it was a religion. That makes things all the more dicey, and stirs the Christian church to a mission.

For some, that mission means convert as many Muslims to Christianity as possible. For some of the same ones, and others, that means using our government to spread freedom by spreading Democracy. By force, if necessary. Give them a taste of freedom and democracy and it will make it easier to spread the Gospel.  Also, they will not want to go back to the ways of a medieval mindset that has unfortunately influenced as many people as Christianity has influenced. If the Christian community could garner enough representation in the high places of government the power of the state could be used as a tool for the advancement of the Gospel. Freedom of religion in a democratic society would open the doors for an unhindered spread of the Christian faith.

In the days following 9/11 every American had questions like, “Who is our enemy? Just who do we go after? Is Islam our enemy? Should we do everything we can to curtail the growth of this religion to reduce the number of people who might want to do this sort of thing?” 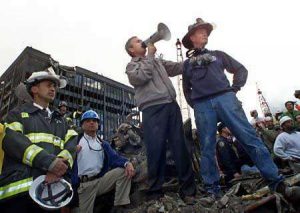 With lack of historical perspective – our current knowledge not much beyond evening news sound bites – it’s easy for Americans to come up with “explanations” for current events and particularly America’s role such as: “Well I guess we have made a few mistakes, but our intentions are noble,” or, “America is engaging in humanitarian efforts to help the Iraqi people,” or “Islam is just out to take over the world – by force if we don’t go along with it.” These explanations become all the more credible in our minds because they are promoted by “experts” who are guests on the news networks and for most of us, who are we to disagree with them? We just don’t know enough to be able to do that.

This book will do much to give you a history and perspective you need to be informed, and at peace.

If 9/11/01 did anything it made us take notice of a religion most of us had been ignoring up until that point. Within a short period of time we had to grapple with how to understand this religion that until then didn’t seem to affect the price of tea in China, as the saying goes. One thing we did know, and that’s that Muslims did have something to do with the price of a gallon of gas. If there had been no oil shortage like there was during the Carter administration then we rarely would have had much reason to think about this religion.

Since 9/11 our national narrative has shifted, especially with ISIS exploding on the scene and giving us graphic videos of ruthless, knife wielding barbarians who all seem to have this in common: they are Muslim, devout ones it seems, and they hate Americans. They really hate Christians and Jews.

Whatever they do, they do as only Muslims do, by proclaiming “Allahu Akbar,” God is Great! The rest of the world looks at what they do and hear them say “God is Great” and think, “If this is the best your God can do to be great I don’t want anything to do with him.”

While President Bush was telling us the radicals did what they did because they hate freedom, he was careful not to make the struggle out to be another Holy War against Islam. American religious leaders, on the other hand, were promoting a narrative that impugned the motives of not just a few radicals, but everyone who followed Mohammad, and affirmed something to the effect that it was the forces of good against the forces of evil, Christian America against the Muslim Middle East. Two months after 9/11 Franklin Graham went on NBC Nightly News declaring that “the God of Islam is not our God … I believe it is a very evil and wicked religion.” (11/16/01) In 2014, Graham told Christianity Today that when he looked at terror groups like the Islamic State, the Taliban and Boko Haram, he thought: “This is Islam. It has not been hijacked by radicals. This is the faith, this is the religion. It is what it is. It speaks for itself.” Islam, he added, hasn’t changed in 1,400 years. “It is the same,” he said. “It is a religion of war.”

Benny Hinn, speaking to thousands of Christians at a conference at the American Airlines Center in Dallas, Texas, said, “We are on God’s side: this is not a war between Arabs and Jews, this is a war between God and the devil.” (6/29/02) Jerry Falwell went on 60 Minutes denouncing Mohammad as “a terrorist.” (10/6/02) In 2005 Pat Robertson declared that the entire world was caught in a religious struggle over “whether Hubal the Moon God of Mecca, known as Allah, is supreme, or whether the Judeo-Christian Jehovah God of the Bible is Supreme.”

While U.S. President George W. Bush had a more moderate approach, saying: “The face of terror is not the true faith of Islam. That’s not what Islam is all about. Islam is peace. These terrorists don’t represent peace. They represent evil and war,” a poll of United States Evangelical Protestant leaders taken in 2002 revealed that only 10% agreed with Bush that Islam is a religion of peace and nearly half agreed that the war against terrorism is basically a war between the West and Islam.

Coming next: CHAPTER  3 – The Common Narrative

← Israel Statehood: A Catastrophe, Not a Miracle
The Doctrine of the Trinity is Not Orthodox →

3 comments for “Peace With Islam: Chapter 2”