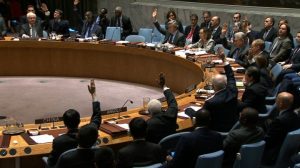 When big-name preachers like John Hagee impugn Palestinians he’s impugning the 50,000 of them who are his Christian brothers. I think people like him who spread prejudice against Palestinians just need to spend some time with Christian missionaries on the front lines in Palestine like Alex Awad who’s the retired pastor at Jerusalem Baptist Church, retired professor at Bethlehem Bible College in the Palestinian Occupied Territories, and author of an e-book on the history of the conflict you can download here for free. His response to Hagee’s Talking Points sent out yesterday regarding John Kerry’s remarks about the UN condemnation of Israeli settlements (Hagee’s talking points to follow) show what I understand to be the prevailing sentiment among Palestinian Christians:

“So many lies and half truths in your Talking Points. The whole international community agreed that Israeli settlements in the West Bank are an obstacle to peace. Many of these countries are good friends of Israel. Not only this, but in addition, Most if not all Israeli human rights organizations hold that Israeli settlements in the Palestinian territories are obstacles to peace. Increasingly, Jewish organizations such as J Street and Jewish Voices for Peace are supporting President Obama and John Kerry in condemning Israeli settlements in the West Bank. It is delusional to assume that the whole world is wrong and CUFI and the Israeli government are right. When Evangelicals fail to look deep into the conflict and therefore take the side of the oppressor, they miss the chance of being an instrument of peace and reconciliation. In the last 100 years, Evangelicals have, not once, made a contribution to peace in the Middle East or anywhere in the world. Evangelicals supported both wars on Iraq and Rev. John Hagee urged his constituency to support a US invasion of Iran. As long as we, Evangelicals, have a corrupted eschatology, we will never rise to our Lord’s call of being peacemakers. I urge you, get off your high eschatological donkey and stand with the true victims who are stranded on the Jericho Road. The least you can do is to have a balanced position so the Holy Spirit can use you and your organization to end this conflict.”

“On Wednesday, Secretary of State John Kerry gave a speech outlining his vision for peace between Israel and the Palestinians. This speech made clear why Kerry is merely talking about peace instead of achieving it. This confused man simply does not comprehend why his prior peace efforts — and all prior peace efforts — have failed.
The reason why there’s no peace agreement between Israel and the Palestinians is not because of settlements, Israeli intransigence or Israel’s “right wing” politicians. The Israelis have repeatedly offered the Palestinians their own state in Gaza, East Jerusalem and almost all of Judea and Samaria (the West Bank). The Israelis have made this offer as long ago as 1937 and as recently as 2008. In 2014, Prime Minister Netanyahu accepted John Kerry’s peace initiative and agreed to resume negotiations with the Palestinian with no preconditions.
The Palestinians have turned down every single one of these offers. And they refused to resume negotiations under Kerry’s peace initiative. They have made clear in both word and deed that they will not agree to any peace deal that requires them to recognize Israel as a Jewish state and end their conflict with Israel.
Simply put, the only real barrier to peace in the Middle East is the Palestinian refusal to recognize a Jewish state in any size, shape or form. Instead, Israel’s supposed partner for peace — the Palestinian Authority — is busy making cash payments to terrorists and their families while naming town squares, streets and parks after the worst of these terrorists. Having educated their citizens to hate Israel, Palestinian leaders cannot now turn around and make peace with her — not if they want to survive.
Secretary Kerry’s words will reward this Palestinian intransigence and embolden these Palestinian terrorists. But they will do nothing to bring peace.”

So who are you going to believe? The Christian Palestinian Missionary to his own people he has lived with all his life and who has actually researched the history of the peace negotiations or the televangelist who sits in his American study blasting the Palestinians he doesn’t even know and provides “facts” that can easily be established to be lies?
After doing my own due diligence it is my conclusion that the Israelis are in a fight for more land while the Palestinians are in a fight for their lives. It is the Palestinians who are the oppressed and dehumanized while the Israelis hold all the cards and have the power to turn things around and make peace. I do believe the average Israeli and the average Palestinian want peace more than anything but the Israeli government of Bibi Netanyahu is simply unwilling and until the Israelis elect some of their own who do not believe in the Zionist agenda of expanding their borders at any cost and until the US is willing to not be complicit in the Israeli atrocities in Palestine there will never be peace in that land.
You might also like:
Why Christians, and All Americans, Should Support the Palestinians, Not Israel
A Christian’s Plan to Deal with the ISIS Crisis
We Should Have Listened to the Libertarians About the Middle East