What some of my Christian friends believe to be loyalty to “God’s Chosen People”, many of us Christians see as a cruel trashing of everything we believe Jesus stood for. The comments from Christians to Pres. Trump’s tweet about withholding aid to Palestinian refugees would have made me sick this morning, if they hadn’t made me livid.
What is particularly frustrating is how many Christians are BLINDLY supporting a decades-old “program” called Zionism which can only be described as current and former political leadership of Israel – which has NOTHING to do with biblical prophecy – slowly grinding the Palestinian people into the dust so their land can be taken from them by wicked violent force, all the while claiming to anyone who will buy it, and fortunately for the political leaders of Israel, multitudes of Americans buy this line, that their choke-hold on the Palestinian society is necessary for their survival or even their self-defense. 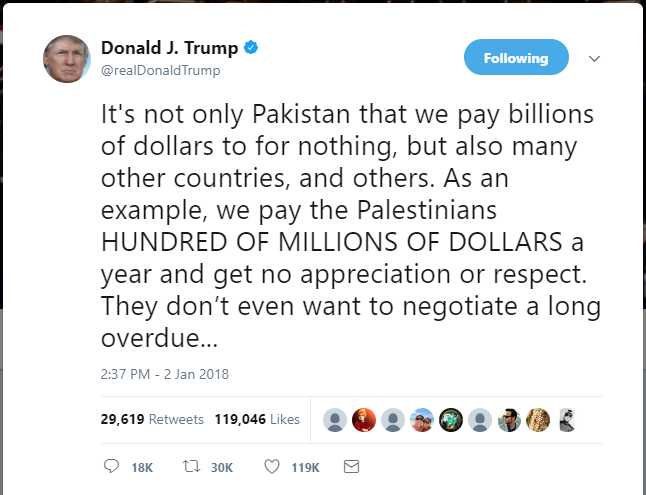 I’m not nearly as outraged at what Trump said or the $60 Million he withheld to the UN program, as I am with the ungodly callousness created by Christian Zionism, which is the belief that God, beginning in 1948 with the establishment of Israel as a nation, has been making good on his promises in the Old Testament to give this land to the Jews.

Pres. Trump, for his part, and you won’t hear this in the liberal press, is being a shrewd negotiator, because he did leave $100 Million on the table to go to the UN program for Palestinian refugees, which will keep the program running for a few weeks or months. Quite possibly Pres. Trump hopes other nations will pick up the tab if the US bails on the program after the $100 Million is spent. No harm done, except to America’s reputation as a generous people. Thanks a lot, Mr. President.
I can only hope that it’s a bluff, and if the international community, which is nearly unanimous in its condemnation of Israel’s treatment of Palestinians, called Pres. Trump’s bluff, and the program did indeed run out of money, Pres. Trump would renege on his statements and find some rationale to continue the funds. Fortunately, Pres. Trump has a history of reneging on threats and promises, and isn’t as callous as he appears.
Or is he? Time will tell. He does have a Jewish son-in-law who from what I can tell is in agreement with the Zionist mentality, and from what I’ve heard has more influence on him than any adviser. He also has a Vice President who appears to believe in Christian Zionism.
The callousness of Christian Zionism is undeniable. I have a few friends and many with whom I went to Bible College who belong to this camp, even if they don’t realize there is a name for it and so don’t identify as a Christian Zionist. You would at least think that no matter their political or theological understanding, they would not support what Israel has been doing, except for two things: 1) They simply have no idea what’s going on over there or what’s at stake. Ignorance like that used to be a good excuse, but we live in an information age. Today, it has to be willful ignorance. Or 2) they really are that callous.
Here’s a few responses to the President’s tweet of 1/2/18 at 2:37 pm, which got 119 thousand likes, 30 thousand re-tweets, and 18 thousand comments. The following are not isolated comments. They happened to be about half of the ones at the top. These three tweets are typical of so many comments I get on my blog and I see on other Christian Zionist organization blogs like Christians United for Israel, and I’m sparing you some of the ugly ones I get from those who claim to follow Christ:
“Israel are the chosen people of God.”
“It is in the Bible.”
“How much more can we stop and save President Trump? Prayers for the Armor Of God to enfold you and your family, always, love from SC.”
And this one from someone named Janet Jones, though not necessarily a Christian:
“Thank you President Trump! I am so proud to call you MY President! Finally, a man who actually loves this country!!”
Jesus didn’t call us to love our country. He called us to love our neighbor. No matter what we believe about The Elect in the Bible. Which means we don’t run our neighbor into the ground.
I should also point out, in reference to the President’s last line of his tweet, that the Palestinians are unwilling to negotiate because they have NEVER been given an offer that respects their dignity as human beings.

← Righteousness by Self-Effort is Good, Expected, and Attainable
Did the Lamb Sacrifice Save the Jew? →