Many Protestants accept the idea that it was the Church that opted to be Trinitarian. This is a myth taught in numerous seminaries and pulpits. If that’s you – stop! It wasn’t the church that decided to define itself as Trinitarian. It wasn’t even the 1st Ecumenical Council at Nicaea in 325 AD. It was the work of one man, the Emperor Constantine. He defined what the church was to believe, and the bishops had to tow the party line. Or face consequences. 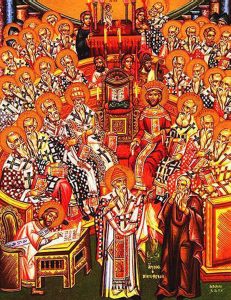 A depiction of the Council of Nicaea in AD 325, at which the Deity of Christ was declared orthodox and Arianism condemned.

Another myth regarding this doctrine is a favorite among Progressives who are less likely to take dogmatic stances regarding dogma. They recognize the early attempts to make sense of Jesus and God were a struggle, and to them a struggle doesn’t have to be resolved. Each of us is free to enter into our own theological struggles and come to different conclusions. Honest inquiry isn’t going to guarantee people end up united on doctrine and that shouldn’t be seen as a problem. We should allow for it out of love for each other. I agree 100%, though in practice not all Progressives will give you the liberty to conclude God is not a triune being. Contrary to the myth espoused by Progressives, the early church councils were not a time of honest inquiry and searching for truth.

The proof that it wasn’t the Church which decided which doctrine was to be orthodox (right belief) is that only two bishops at the council voted against the Nicene Creed which for the first time in history codified the Doctrine of the Trinity. The rest of the Arians (the non-Trinitarians) who wanted to vote against the creed voted for it out of fear. The minute the vote was taken those two bishops were deposed by Constantine. On their way out the door the exiled bishops stopped at the bench of their erstwhile leader, Eusebius of Nicomedia, and criticized him bitterly for bowing to the emperor’s will. Arius, for his part, was not even allowed to speak at what amounted to his own trial and he did not get to vote.

So much for honest inquiry and struggling with truth.

Quoting from When Jesus Became God by Rubenstein:

“That there was pressure brought to bear by Constantine is undeniable. The sentences of exile passed on the hard-line Arians demonstrated the consequences of opposing him. Clearly, to the extent that the bishops felt they had signed the creed under duress, they felt justified later on in qualifying and ‘explaining’ (some might say, explaining away) their signatures. Eusebius of Caesarea, for example, wrote a long letter to his congregants explaining that homoousios and “begotten, not made” did not mean that Jesus shared God’s essence – that he was God – but only that he was a unique creation of God. Eusebius of Nicomedia went even further. He explained that while he affirmed the body of the Nicene Creed (interpreted in an Arian sense), he did not accept the anathemas (damnations to hell that generally ended creeds), which were based on misconceptions of Arius’s teachings.”

In those days no church leader stood on his own merits. Everyone sought the blessings and protection of a powerful benefactor. That’s just how things were done in the 4th century. Which theological position won the day was determined by who could convince a powerful benefactor, preferably the most powerful such as the Emperor. This was a bit dicey since Constantine often flip-flopped and supported whomever was in front of him at the time. Constantine’s position and the councils he convened to “ratify” his decisions reflected who was the latest to have his ear. Not long after Nicaea it was Arius who had his ear, and Athanasius, the chief proponent of the Trinitarian position, was sent into exile.

Would Christians today accept without question the results of a council under such tyrannical meddling by a non-theologian head of state? Would we allow President Obama to decide whether we can be a member of our own local church based on our agreement with his ideas about Open Theism, Predestination, or Gay Rights? Would we think our church came to a consensus, or that God was in it, if he strong-armed the delegates to vote his way in our denominational synods?

Yet churches today insist that God was in the process which adopted the Doctrine of the Trinity at Nicaea.

When there is no separation of church and state it all boils down to politics. In this case, dirty politics. On both sides. Victors in their religious disputes used the power of the Roman state against their enemies, just like the Pharisees and Sadducees did against Christ. It was the Standard Operating Procedure for their day. It’s also what is depicted in the book of Revelation as the Whore (Old Testament Church) riding on the Beast (the Roman Empire), persecuting the New Testament church using the power of the state.

Two years after Nicaea it wasn’t any bishops that Arius went to in order to be admitted back into communion with the other Christians, it was the Emperor. He was still running the show. He did that until his death after he convened several councils, and his successors continued the practice after him.

Arius’s face to face with Constantine paid off. Four successive councils pronounced Arius’s orthodoxy. Athanasius, the ringleader of the Trinitarians, was exiled five different times. Three years after Nicaea, at the Council of Nicomedia, anti-Arian bishops were replaced by formerly deposed Arian bishops. Arius’s most vehement opponent, Bishop Marcellus of Ancyra, was excommunicated and deposed on charges of heresy.

If church doctrine is supposed to be determined by a democratic vote among representatives of the whole church (not that that one was) then one of the only legitimate claims to a truly ecumenical council representing the whole church came at the joint council of Rimini-Seleucia in 359 AD which was attended to by more than 500 bishops from both the East and West. The Council of Nicaea, by comparison, had only half as many bishops, and only a handful from the West. Rimini-Seleuca, which was convened by Emperor Constantius who happened to be an Arian, adopted the Arian creed. No surprises there. This council was later repudiated by the Church. Councils whose products were later deemed unorthodox not only lost the “ecumenical” title but virtually disappeared from early church history and you never hear about them, even in seminary.

This isn’t Dan Brown conspiracy theorizing, this is just how things were done in those days. In the years between the so-called 1st and 2nd Ecumenical Councils, 325 to 381 AD, numerous councils no less ecumenical than those two were convened and if the emperor at the time was Arian the Arian creed was adopted, and the Trinitarian creed was rejected. But you never hear about those councils or read about their calls for defending the apostolic faith because the eventual victors never include them in any lists of ecumenical councils.

Towards the end of the 4th century Hilary, Bishop of Poitiers, wrote despondently:

“Every year, nay, every moon we make new creeds to describe invisible mysteries.
We repent of what we have done, we defend those who repent, we anathematize those whom we defended. We condemn either the doctrine of others in ourselves, or our own in that of others; and reciprocally tearing one another to pieces, we have been the cause of each other’s ruin.”

Does this process sound even remotely like the one we see in Acts chapter 15 when the church came together to decide about the necessity of Gentiles practicing circumcision, where they could finalize the council with “It seemed good to us and the Holy Spirit to…”?

Lest you think I am making up this bit about Christian orthodoxy being determined by a Roman emperor instead of the church, caesaropapism actually became official church policy at the 5th Ecumenical Council, the Second Council of Constantinople convened in 553 AD by the Emperor Justinian. He was a bit of an armchair theologian himself but his status as such and him not being a genuine theologian didn’t disqualify him from deciding the outcome of that council before it was even convened. The 2nd Council of Constantinople even made it a law that nothing could be done in the Church contrary to the emperor’s will and command.

Again, the church does not establish orthodoxy, the emperor does.

It’s ironic, and discouraging, when Protestants put so much faith in the early ecumenical councils that they consider what they have decreed to be the only orthodox and acceptable doctrine a Christian can believe in order to be a member of a church, or for many, to be a Christian. It’s ironic because the founder of the Protestant movement 500 years ago, Martin Luther, was himself in front of an emperor (Charles V) after being excommunicated by the Catholic Church, and saw himself as a sworn teacher of Scripture who must advocate the right of all Christians to hear and live by the gospel and not be usurped by the Church when he said,

“Unless I am convinced by the testimony of the Holy Scriptures or by evident reason-for I can believe neither pope nor councils alone, as it is clear that they have erred repeatedly and contradicted themselves…”

The Protestant movement was founded on the principle of allowing individuals the liberty to read the scriptures for themselves and come to their own conclusions about what it says. For Protestants to create Statements of Faith that must be adhered to in order to be a member of anything is to annul and reject the gift of the Reformation – individual liberty.

“Are we supposed to accept anyone as a bona fide member or our church no matter what he believes?” you might ask.

You know the old saying, “A church isn’t a country club for the perfect, it’s a hospital for the sick.” If someone is in need of healing the best place for them is in the church, where they can get the help they need. Or at least it should be that way. Liberty should not be sacrificed at the altar of uniformity.

The LOGOS of John 1 – First a Plan, Then a Person