We need to do this in a way that marks us as being completely different than them, and I don’t mean by that how advanced our military is compared to theirs. I’m talking about a difference in character and mission.

For the record, I’m not a Republican or a Democrat. I’m not a Liberal or a Conservative, or even a Libertarian, though I suppose Libertarians will find the most to agree with here. I don’t fit easily into any of these labels but then neither will a solution to the Middle East crisis, if there is one to be found. We really can’t ignore ideas about what to do just because we might be able to pass it off as “an Evangelical answer” or “a Liberal answer.” The Middle East is complex and requires an honest look at all the options.

I’m not much into labels, but one label I do accept is “Christian.” This means different things to different people but nevertheless as Christians we do have answers to the world’s problems. Here are mine. I do hope this reflects not just a “biblical world view”, but reflects the heart of God for the Middle East.

I want to get one thing straight from the outset.  My blood boils just like anyone else’s when hearing about the brutal atrocities being committed by ISIS fighters against just about everybody but themselves. I don’t have a problem with America being the world’s police force, or the big kid on the block protecting the little kids on the block.  I think it’s an honorable thing to do. Speaking of which, I often wonder why the Middle East gets all the attention when far worse atrocities and genocide are happening in other parts of the world and we sit idly by doing nothing. I suspect it has something to do with the price of gas at your local station. But that’s the subject for another post.

As you can see I am not a pacifist.  I don’t interpret “turn the other cheek” the way pacifists do. I really don’t think Jesus was thinking about international power politics when he said that. If you are a pacifist looking for a don’t-defend-under-any-circumstances answer you will be disappointed with me. Unlike a pacifist, I can find justification for dropping A-bombs on Hiroshima and Nagasaki (but not invading Korea, Vietnam, or Iraq).  The justification is that if that war had continued for just one more month then just as many Japanese people would have been killed and a lot more if the war had continued for more than one month, not to mention how many Americans would have been killed if Japan hadn’t surrendered when they did.  History has proven that was a humane decision.

With the war on terrorism, however, history is not supporting our actions. Nobody can make a solid case for how many lives or even if there has been a net gain in lives due to our campaign to eliminate the terrorists. On the contrary we can point to specific instances where Americans have been killed BECAUSE of our involvement in the Middle East. We have those dead and injured numbers, and it doesn’t look good. Furthermore, many say we have killed more people in the Middle East than radical Islam has killed. Would they have killed more if we had left them alone? According to this article the answer is no, definitely not.

In Jay Sekulow’s (American Center for Law & Justice) new book called Rise of ISIS – A Threat We Can’t Ignore he lays out only two options, either negotiate with the enemy or “evil such as this must be met with force. Nothing else will 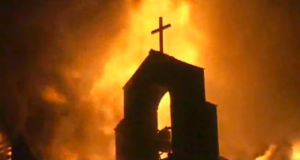 do,” and by force he means try to kill every terrorist in the Middle East. If Mr. Sekulow is the voice of the Christian Right then I have a problem with the Christian Right and hereby turn in my membership card.  As followers of Jesus there is so much more we can do and it’s sad that Christians can’t think of any. I no longer want to be a part of a movement that has nothing more to offer the world than what the world can produce well enough on its own: fear, hatred, and violence. As Christians I think we can do better. Way better.

I’m not a pacifist, but I am also not a war-mongering right winger so if you’re expecting a “peace through military strength” answer you too will be disappointed in what I have to say.

Emotion certainly is a good motivator of the masses, but we can’t remove our heads when deciding what to do about the ISIS crisis. We need to go about the Middle East wisely, in a way that’s not counterproductive, and helps both us and the people of the Middle East. We need to do this in a way that marks us as being completely different than them, and I don’t mean by that how advanced our military is compared to theirs. I’m talking about a difference in character and mission.

Jesus commanded us to go and make disciples of all nations.  Many Christians believe radical Muslims are a lost cause but Jesus wasn’t excluding anybody from the Great Commission.  The turmoil in that area, much of it caused by us, has left a huge door of opportunity for us to be the hands and feet of Jesus in that broken land but we are squandering it on more bombs to create more turmoil.

Before I can give you a plan that will make much sense you need to understand several presuppositions on my part:

So what are we going to do in the Middle East? One wonders if we had just stayed out in the first place if things wouldn’t be better off for everybody but unfortunately what is done is done. How are we to proceed?

I would like to suggest the following as we go forward:

Many won’t like the idea of adding more religion to the mix of what makes up the Middle East thinking that religion is at the heart of the area’s problems but those people do not have an experience with the heart-changing power of the Holy Spirit. Those of us who do know that the best thing, and for the Middle East, probably the only thing that will bring peace, is if the people are submitted to the King of Peace. If the only “meddling” western nations had done in that area had been to advance the Kingdom of God by being the hands and feet of Jesus we wouldn’t have created so many problems and the Middle East would look totally different than it does today.

Why Christians, and all Americans, Should Support the Palestinians, Not Israel

We Should Have Listened to the Libertarians About the Middle East

← We Should Have Listened to the Libertarians About the Middle East
What [the] Hell? →